--  Break up the imperial family! Return to "Person"! --  Demonstration for No More Emperor System

Emperor's message expressed last August is causing a problem of Emperor alternation in the Heisei era. The message is an unprecedented and unusual voice from the dynasty which has never been seen or anticipated during the post-war era. Emperor Akihito himself spoke out about the desired emperor system on TV. However, no media or politicians have criticized his speech as unconstitutional. The situation is going in line with his intention. We found, in the Diet, unfortunately, all members from the Liberal Democratic Party to the Communist Party endorse Akihito's abdication or "keeping the emperor system".

Accordingly, we have no options but to take our message of termination of the emperor system to the streets.

However, on the street are lots of rightists and policemen who go their own way or do whatever they want to do. On Nov. 20 last year, we held a demonstration for No More Emperor System where a handy megaphone and many placards were ripped off and the window of an advertising van was broken by rightists. However, the police put a blind eye on such violence. They continued to ignore it until our demonstration ended. The city government regarded our demonstration as annoying, advising the residents to be careful about the demonstration by e-mail.

We have found our right to criticize the emperor system is on the verge of death, even if we don't have the Maintenance of Public Order Law currently.

We're calling to all of you, and you as well who has never joined demonstration against the emperor system.

We will hold a 'Demonstration for no more emperor system" in Kichijoji again, though we were attacked brutally by the rightists and police on Nov, 20 last year. Each step we are taking will bring discrepancies of the emperor system to light, so that we could obtain a political right in this country.

Any person with a feeling of "No More Emperor System" can join in our demonstration. Now Join us! Demonstrate together! 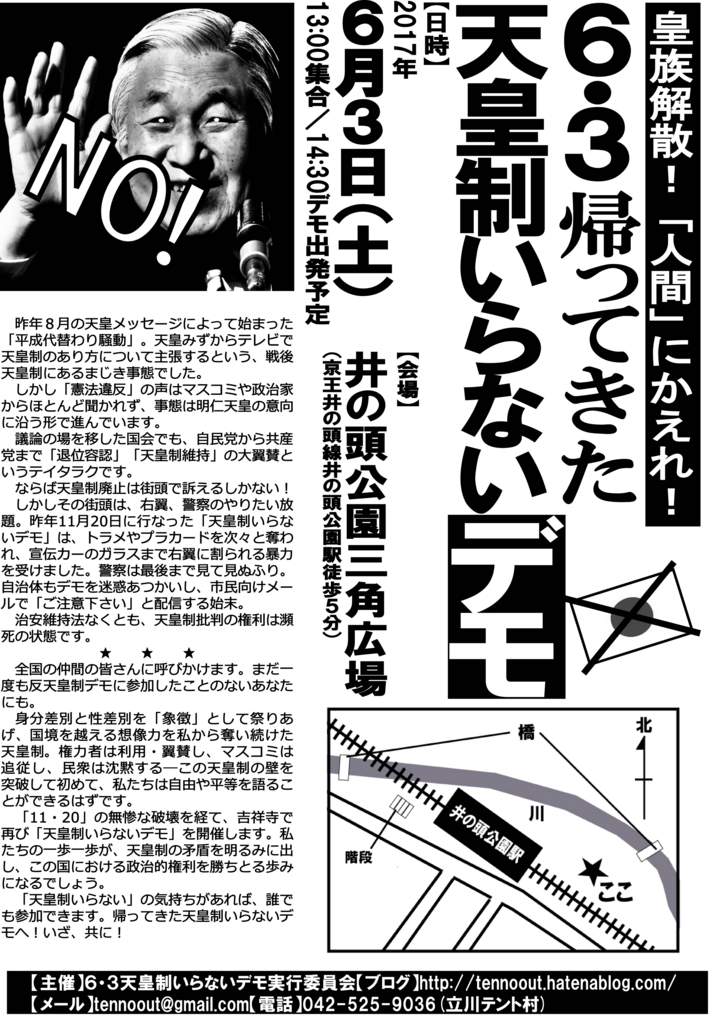